Number of students in Colorado with severe reading deficiencies drops 2.7% since 2013 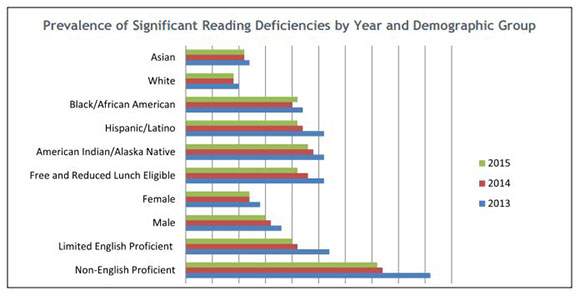 According to a recent report by the Colorado Department of Education, the number of students with reading deficiencies has dropped since the Reading to Ensure Academic Development (READ) Act was implemented in 2013. The READ Act was passed in 2012 with the goal of ensuring that every student in Colorado reaches reading proficiency by the end of third grade, a time that researchers have identified as a critical benchmark that often predicts academic success throughout school. Under this act, students identified as having a “severe reading deficiency” (SRD) receive intervention support until their teacher determines that the student is meeting reading expectations for their grade level.

In 2013, about 1 in 5 (16.5%) of K-3 students were identified as having a SRD. That number dropped to 14.4% in 2014, and even further to 13.8% in 2015, resulting in a 2.7% decrease in students having a SRD over the two years since the READ Act was implemented. This may not seem like a high percentage, but it equates to 6,059 students who are now less likely to struggle throughout school and are more likely to graduate high school than students with a SRD.

The numbers are even more impressive among students who remained in the same school district. Following the 2013 cohort of first-graders, those who had consistent support from the same district were more likely to catch up with their peers’ reading level; out of the 10,737 students identified as having a SRD, over half (54%) were reading at grade level by the time they reached third grade.

The full report contains a wealth of related information, including breakdowns of the data by region and demographic group. This information can be useful to school librarians to identify which students may need extra support with reading.

Check out the full report here.