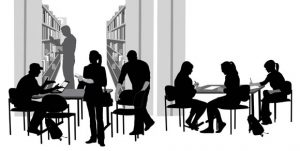 Library Journal’s annual Placements & Salaries 2016 report shows a positive view of the library job market, marked by increasing salaries and full-time employment. The data from this report is drawn from a survey of 2015 LIS graduates.

According to the survey results, 2015 graduates were generally successful in finding jobs, with about 4 in 5 (82%) reporting that they were employed full-time. This is consistent with the number reported by 2014 graduates (83%), and well above full-time employment reported in 2013 (70%). Graduates of the 2015 class also tended to be younger than their predecessors; more than two-thirds were under 36 and over half were pursuing librarianship as their first career.

While most LIS graduates were able to find full-time employment, it took hard work and patience to land those jobs. More than half of employed LIS graduates remained with the same employer they worked for during their time in graduate school. About a third found a job before their graduation date, but reported beginning their job search about six months before leaving school. Those who did not start their job search until after graduating said that it took nearly five months to find a job.

The full report and data tables can be found on the Library Journal website.