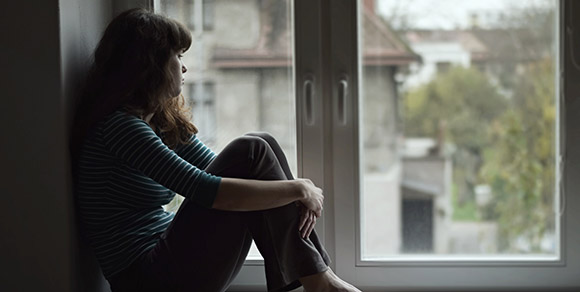 Libraries are not traditionally thought of as social spaces. Stereotypes of older women glaring over thick-rimmed glasses to shush talkative individuals pervade our pop-culture references. However, studies show that public libraries foster social support and decrease isolation. At a time when loneliness is being deemed a public health crisis in the United States, libraries are uniquely positioned to offer up a cure.

Cigna, the global health service company, reported epidemic levels of loneliness in 2019 that continue to intensify. After surveying 10,500 adults, they found that three in five (61%) classify as lonely, a seven percentage-point increase from 2018. The results are based on a 20-item questionnaire developed to assess self-reported, subjective feelings of loneliness or social isolation. A score of 43 or higher indicates loneliness. The report’s findings show a national average of 45.7 out of a possible 80.

Loneliness is affecting people of all ages, all demographics, and across socio-economic divides. Gen Z (18-22) is the loneliest age bracket, with levels decreasing as people get older. Additionally, entry-level employees and executives are the two most likely groups to report always or sometimes feeling there is no one they can turn to, not feeling close to anyone, and that no one really knows them well. Hispanic and African American workers agree in higher numbers that they feel abandoned by coworkers when under pressure at work. So how do we reach such a wide-ranging cross-section of American society to address this epidemic? Open the door to a public library.

Libraries’ extensive population reach, their access to diverse sectors of the US population, the public trust they command, and their diverse geographic coverage favorably position them as a multi-sectoral strategy to advance public health. 95 percent of the US population live within a public library service area and as Donald Barclay writes, “Public libraries are perhaps the last remaining indoor public spaces where an individual can remain from opening until closing without needing any reason to be there and without having to spend any money.”

Research published in the Journal of Community Health shows that libraries can address social exclusion among structurally vulnerable groups, from homeless individuals to new parents. In Denver, a Community Technology Center team regularly visits the local day shelter to give participants bus tokens, a tour of the main library, and library cards. In New Jersey, a new parents’ support group meets weekly at the local library. LGBTQ youth who may not feel safe at home or on the streets can turn to a library as a designated safe space. Library programs such as Drag Queen Story Hour also reduce social exclusion by increasing acceptance of the LGBTQ community. Additionally, libraries decrease social isolation by offering programs that build community and foster relationships. The Lifetime Arts’ program operates across 13 states and 80 public libraries, providing writing, painting, choir, and dancing classes for older adults. For newcomers such as refugees and immigrants, libraries serve as critical spaces to foster social integration. In Hartford, Connecticut, the public library provided services to promote immigrant civic engagement, including a core group of volunteer immigrants to help newly arrived individuals with tasks such as accessing community and legal services.

The 21st century library is an intersection of people and purposes. As national health data highlights a critical need for connection, the social role of libraries should not be overlooked. However, additional research is needed to evaluate the impact libraries have on the overall social wellbeing of patrons and the untapped potential for the wider—lonelier—public. 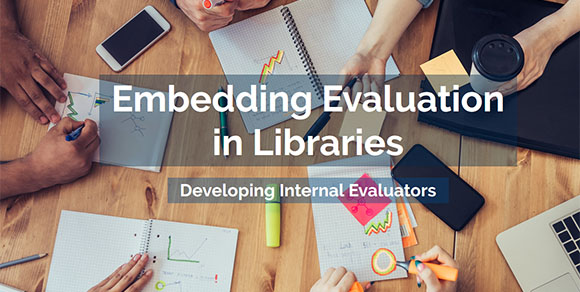 Are you wondering how to assess your library’s impact? Do you have a brilliant idea for evaluating a library program or service but don’t know how to get started? Did you participate in the Research Institute for Public Libraries (RIPL) and need some ongoing support to realize your big ideas? Do you supervise a public library evaluation coordinator or data librarian and find it challenging to position them for success? The IMLS-funded project Embedding Evaluation in Libraries: Developing Internal Evaluators is the training program for your library.

During a nine-month period from summer 2020 through spring 2021, teams from up to six Colorado public libraries will complete robust, outcome-based evaluation projects supported through a peer learning process that includes in-person and virtual training, coaching, and technical assistance.

To be eligible, participants must work in a Colorado public library (all library sizes and locations welcome!) and participate as a team of 2-4 staff from the same library, including the supervisor of the primary person working on the evaluation. At least one member of the team must have some previous education and/or experience in evaluation, assessment, or research methods, such as participating in a RIPL event. All team members must attend the Kickoff Institute July 27-28, 2020 at the Arapahoe Libraries Administration (Support Services) Building in Englewood, and commit to attending the 2-day Wrap-Up Institute the week of April 5-9, 2021 (exact location and dates TBD after the cohort is formed).

Want to learn more about this opportunity? We held a webinar on January 29 to provide information about participating in Embedding Evaluation and chat with a current California cohort member, Lisa Dale (Collection Services Manager, Sacramento Public Library), about her experience. The recording is linked from this webpage.

This project is made possible in part by the Institute of Museum and Library Services grant # RE-13-19-0076-19. 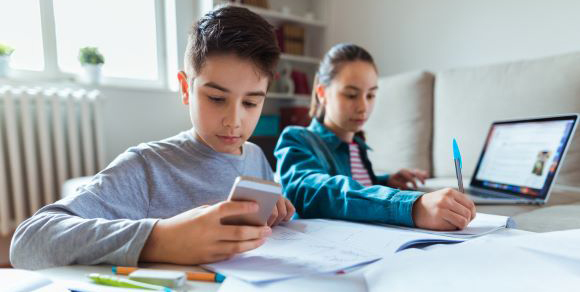 In the digital age, algorithms based on personal data allow information to find us as opposed to the other way around. Have we adequately prepared the next generation, who are predominantly accessing the world through social media platforms and search engines, to filter through the noise?

In a 2019 survey of US secondary school librarians, 96 percent said they teach some form of information literacy. These research skills allow students to “discover and evaluate credible information effectively and ethically by thinking critically.” In other words, students learn to identify biased reporting and suspicious sources, which can be applied to everything from Instagram posts to citizen news sites. Yet, according to a 2017 survey of academic librarians, the knowledge is not being retained—only 28 percent of first-year students enter their institution prepared for college-level research. If information literacy is widely taught in schools, why is there such a large gap?

Librarians site a “lack of time” (69 percent) and “lack of faculty support” (59 percent) as the biggest challenges to instruction. “I don’t think [faculty] see these skills as important. They also feel so pressed for time covering their curriculum that these skills fall to the wayside.” Survey respondents candidly admitted that higher-ups in the educational food chain don’t see a critical value in information literacy skills. The lack of prioritization from administrators trickles down to teachers who often fail to prioritize “non-tested” material. Librarians note the difficulty in finding instruction time for students and the lack of integration and reinforcement of these skills across all curricula.

Amid the frustration, some respondents offered that one solution could be to start younger. “Students are so hands on with tech, even BEFORE entering preschool, focusing on these skills at the high school level seems too late,” noted one librarian—and they’re right. A 2015 study by Pearson found that 53 percent of 4th and 5th graders and 66 percent of middle school students regularly used a smartphone. Yet, only 28 percent of children learned about “seeking multiple perspectives” prior to entering high school. How to effectively use open web resources was more likely to be introduced in grades 10 and above, meaning there are years of access to information without proper education on how to appraise it.

One librarian who participated in the research study offered this as a final thought, “In our world of ‘fake news,’ teaching our students how to find accurate news sources and how to evaluate them is critical to have well-informed citizens.” Information literacy education needs to be addressed by understanding the critical role librarians play in laying the foundations for information consumption. Librarians are necessary for teaching students how to evaluate sources and make informed decisions to navigate a world increasingly embedded in the internet and social media. 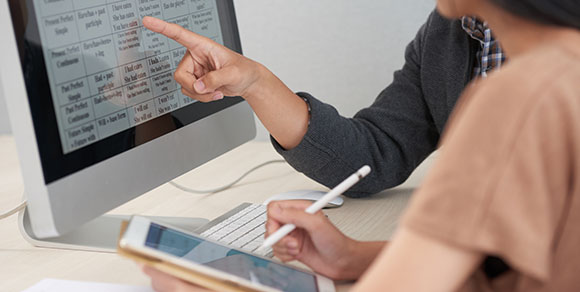 The Organisation for Economic Co-operation and Development (OECD) assesses adult competency on an international scale, using the Survey of Adult Skills. The survey assesses adults aged 16-65 on literacy, numeracy, and problem-solving in technology-rich environments. The OECD focuses on these three skills because they are necessary for full participation in society, relevant to a variety of contexts, and learnable. The United States as well as Ecuador, Hungary, Kazakhstan, Mexico, and Peru participated in the most recent round of data collection in 2017, and the United States also administered the assessment in 2012-2014.

The results of the survey allow researchers to calculate averages across all OECD countries for several measures. In addition to skills in literacy, numeracy, and problem-solving, the relationships between these skills and other variables are calculated on average across all participating OECD countries. These averages provide a valuable baseline for comparing country-specific results.

The research found that the gap in literacy proficiency between high- and low-educated adults is greater in the United States than on average for other OECD countries. The research also shows that the relationship between parental education and the skills of adult children is stronger than it is in other OECD countries on average. Finally, the study found that higher proficiency in literacy has a positive impact on other beliefs and behaviors, like trust in others, political efficacy, and self-reported health.

What do these findings mean about literacy in the US relative to the rest of the world? While adult literacy proficiency is impacted by a person’s education and their parents’ education across the countries included in the study, those relationships are even stronger in the US. US adults who did not pursue further education and had parents with lower education levels had lower literacy proficiency than they might if they lived elsewhere in the world. Libraries strive to provide additional access to literacy skills, and these results show that the need for that access is still great, particularly for those who have less educational experience.