The Impact of the Recession on Public Library Use in Colorado

In winter 2011, LRS conducted a study on the recession’s impact on public library use. The findings indicated that in 2006 to 2007 (prior to the recession), use, as measured by visits, circulation, program attendance, and Internet use, remained relatively static or decreased in Colorado public libraries. In contrast, use increased by between 6% and 28% during the recession (2007 to 2009). 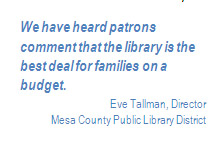 the post-recession recovery period, providing community gathering space, access to entertainment and educational resources, and information about job hunting, economizing, and other topics that are particularly relevant during this time. Assistant Commissioner Gene Hainer commented, “This study supports what many people know, but that the media and political leaders rarely acknowledge; that libraries—and the staff therein—are essential assets to communities in times of financial stress. Far from being just places for books and children’s stories, libraries are a critical lifeline to state residents from all walks of life.”

This report provides detailed results of the study.
Fast Facts