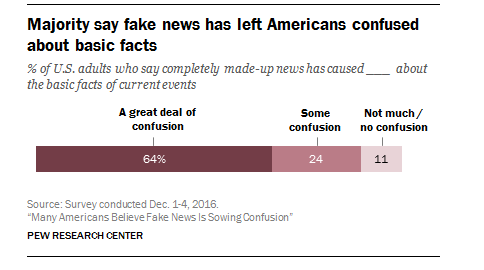 The Pew Research Center recently conducted a survey on Americans’ sentiments about fake news.  Participants were asked to fill in the blank in the following sentence: “Completely made-up news has caused _____ about the basic facts of current events.” Nearly two out of three of U.S. adults surveyed (64%) said that completely made up news has caused a great deal of confusion. The Pew Research Center report highlights that this response was shared across “incomes, education levels, partisan affiliations and most other demographic characteristics.”

Participants were also asked about their confidence in their ability to recognize fake news. About 4 out of 10 (39%) people surveyed said they were “very confident” they could recognize made-up news, and an additional 45% said they were “somewhat confident.” Although people had high confidence in their abilities to recognize fake news, many people had still shared it online. Overall, about a quarter (23%) of respondents had shared made-up news, sometimes because they did not initially realize it was fake and sometimes for other reasons, like entertainment.

Finally, participants were asked whose responsibility it is to stop the spread of fake news. Respondents could select multiple groups with “great responsibility.” About 2 out of 5 people (43%) chose “members of the public,” a little less than half (45%) chose “the government, politicians, and elected officials,” and about 2 out of 5 (42%) chose “social networking sites and search engines.”

While librarians and librarians were not included specifically as a group that has a great responsibility to prevent the spread of fake news, many library publications–including American Libraries, School Library Journal, and Public Libraries Online–have pointed out the important role that strong information literacy skills play in preventing the spread of fake news, and how this vital skill set can be taught by librarians.