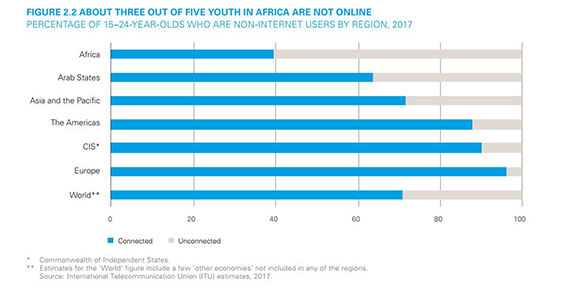 UNICEF recently released The State of the World’s Children 2017: Children in a Digital World. This report examines the impact that digital technology has had on the lives of children all over the world.

Young people are the most digitally connected age group worldwide. Seven in 10 (71%) young people use the internet, compared to a little less than half (48%) of the total population. However, this leaves out about 346 million young people – more than the total population of the United States – who are not using the internet or other digital tools. The children left out of digital connectivity are often those who could benefit most, creating a digital divide that could deepen existing socioeconomic divisions if it is not closed.

As part of the research for this report, UNICEF used the social messaging tool U-Report to survey young people (ages 13-24) about their internet use. They got 63,000 responses from youth living in 24 countries. About 2 in 5 respondents (42%) said that they taught themselves how to use the internet, while a similar number (39%) reported that they learned from friends or siblings. Young people from low-income countries are 2.5 times more likely than their wealthier counterparts to say that they need more access to digital devices to improve their lives online.

When young people were asked what they like most about using the internet, 2 in 5 (40%) said they like using it learn things for school and about a quarter (24%) like using it to learn skills that they can’t learn in school. When asked what they dislike about the internet, about a quarter (23%) mentioned violent content and a third (33%) dislike seeing unwanted sexual content. About 1 in 10 (8%) said that there is nothing they dislike about the internet, an answer that was more popular in low-income countries.

For more information about children growing up in a digital world, the full report can be found here.