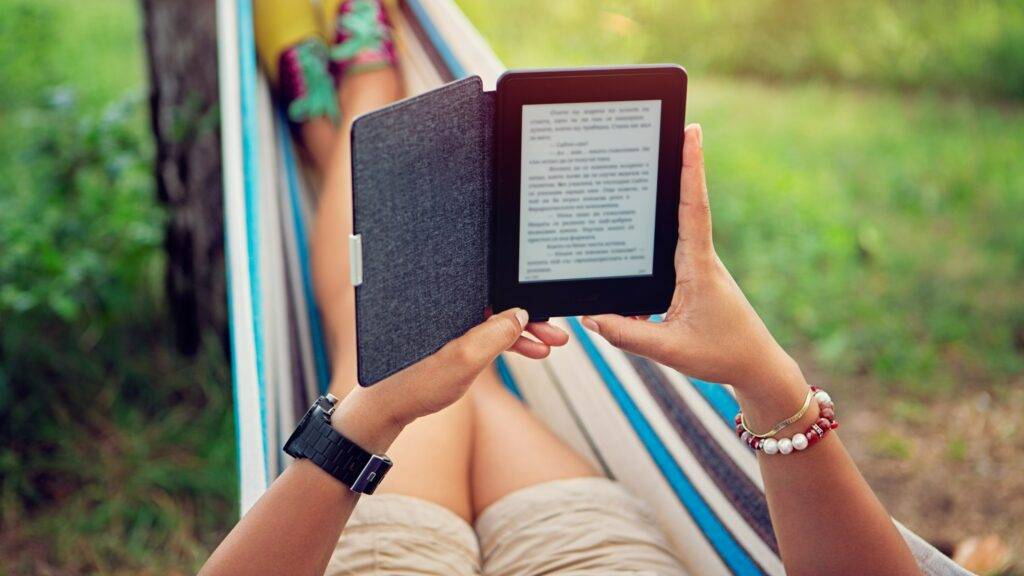 At some point during this past year you may have found yourself trying to remember what pre-pandemic life looked like or wondering if there is anything that remains unchanged. We’ve been having similar thoughts at LRS, so when new research is published on reading habits we are eager to see what has shifted and what, if anything, has remained the same. In the latest reports we found a mixture of old habits and fresh growth leading libraries into new territory. This month LRS is taking a break from research methodology to highlight sections of a few recent publications that paint a picture of library patron habits with data: Pew Research Center’s “Three-in-ten Americans now read e-books” by Michelle Faverio and Andrew Perrin, American Library Association’s (ALA) “State of America’s Libraries Special Report: Pandemic Year Two,” and Library Journal’s “Collection Rebalance | 2022 Materials Survey” by Neal Wyatt.

In January of 2022, Pew Research Center published their findings on Americans’ reading habits. They surveyed 1,502 citizens and weighted the results to be representative of the overall population. As revealed by the name of the article, 30% of Americans now report having read at least part of an ebook in replacement of, or in addition to, print books. This is a 5% increase from last year, after only intermittent growth since 2011. However, only 9% of respondents reported accessing books exclusively in digital forms (i.e., ebooks or audiobooks).

Despite the pandemic, the overall number of people that report reading a part of, or a complete book within the past year regardless of format remained steady in 2021 at 75%. Pew has been tracking this statistic since 2011 when 78% reported reading a book, and this data point has only shifted slightly over the ten year period.

After looking through this report at LRS we considered it worth mentioning that, although Pew’s article does state once in the text that these percentages refer to those who have read completely or partly through a book, in their visuals and later in the text this category is referred to as people who have read a book. You have to be careful to remember that these numbers also include those that did not read all the way through a book.

In April 2022, ALA released their State of America’s Libraries report which outlines the many ways libraries are evolving in the face of challenges. The major focus of the report revolves around mounting politicized censorship efforts, such as the influx of challenges to programs and materials (and even funding) in libraries across the U.S. The first half of this report covers important topics such as book bans, disinformation and EDI, and we highly recommend that you check it out.

For our purposes here, we focused on the section “How We Read in 2021” which begins by referring to the Pew study discussed above. To expand on this report ALA shares that, according to Michelle Jeske of Denver Public Library (DPL) in the New Yorker, digital checkouts at DPL have increased by over 60%. This considerable jump requires DPL to spend a larger portion of their budget on digital collections.

ALA focuses on how this growing demand is complicated by the fact that libraries often license ebooks from third parties, which is expensive, and their rights to these ebooks have a time limit. For example, libraries may pay around $40 dollars more for the rights to an ebook for only two years, compared to a regular consumer paying for unlimited use of the same ebook. These expensive and restrictive licenses make it difficult for libraries to meet demand, leading to long waits for patrons and the absence of popular titles from ebook and audiobook collections.

Material formats and content in 2021 were also examined by Library Journal’s recently released 2022 Materials Survey recap. This survey was completed by 131 U.S. public libraries and found that budget portions spent on ebook collections have fallen since a spike in 2020. Overall, allocations for ebooks were only 1% higher in 2021 than before the pandemic, sitting at 13%. While some libraries reported a shift back to print in 2021 and some reported a growth in ebook readers, the general trend was a flexible hybrid approach for many patrons depending on the accessibility of their preferred books. This is consistent with Pew’s finding that 33% of people read in both print and digital formats.

According to Library Journal’s survey, spending on materials in 2021 returned to similar numbers from before the pandemic, but as ALA also discussed, collection budgets are still strained between many formats and frustrating restrictions on digital content. It is expected that the demand for digital formats will continue to grow, but that growth is returning to a gradual increase, and according to Pew 32% of Americans still report reading only print books. In the conclusion of Library Journal’s report Neal Wyatt writes, “Physical media collections look to be shrinking, but librarians know how long a change in format takes to promulgate across a community. It might be several more years before the habits tested and gained during the pandemic are reflected in more than incremental shifts in spending.” 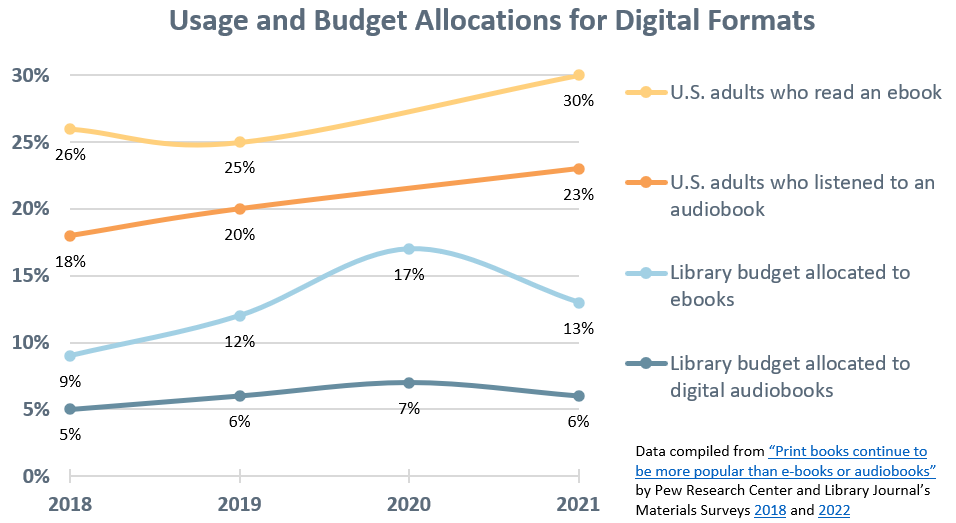 Pew’s research shows very gradual shifts in reading habits and digital content usage which accelerated slightly between 2019 and 2021 with a 5% increase in America’s population utilizing ebooks. This development can easily be attributed to the pandemic limiting in-person interactions. ALA’s report depicted a more drastic shift in library patron preferences by highlighting DPL’s considerable increase in digital content check-outs. The licensing battles libraries face to grow their ebook collection and meet this demand is ALA’s focus. Library Journal’s survey showed material spending leveling out from the pandemic and painted a picture of the new hybrid realm libraries have entered. On top of these changes, library staff are also finding that patron interests are shifting during this turbulent time, creating a need to weed and diversify collections.

A library’s ability to provide quality audiobooks and ebooks in a timely manner is a matter of equitable access. While many patrons can base their format choice on whichever is most quickly and conveniently available, ebooks also provide critical tools such as magnification and text to speech. If a library is able to provide these to patrons it becomes a more equitable and inclusive environment.

On a very related note, though not provided at public libraries, a recent visit to Colorado Talking Book Library (CTBL) updated the LRS team on the exciting development of braille eReaders, a huge technological advancement for increasing accessibility for people with visual impairments! The prospect of these being provided by CTBL in the future is wonderful, and you can find a video describing these devices here.

Thank you all for reading, and remember to reach out to lrs@lrs.org with any questions you may have.