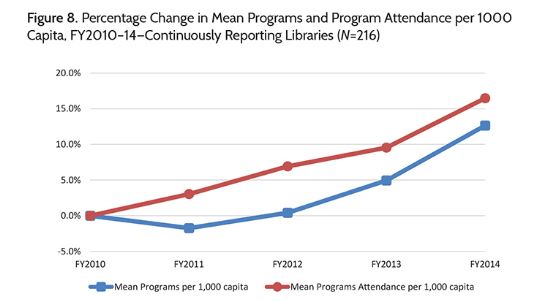 The Public Library Association (PLA) recently published the results of their Public Library Data Service Annual Survey. The survey data are from fiscal year 2014 and include finances, resources, service usage, and technology use in public libraries.

Libraries also reported steady increases in both the number of library programs offered and program attendance. Although growth has been reported for the past three years, FY2014 marked the fastest rate – programs offered by public libraries increased by 7.3%, while program attendance increased by 6.3%. As PLA notes, more library programming combined with declining circulation numbers suggests that libraries are shifting their service delivery priorities.

The full report provides a wealth of information about public libraries in the United States and can be found here.