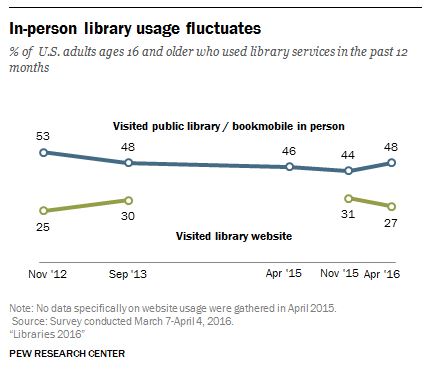 Pew Research recently released their annual report on attitudes of Americans towards their public libraries, Libraries 2016. Alongside a plethora of information detailing who is visiting public libraries and why, Pew also reported on those who are not visiting the library.

Despite having never visited a library, respondents maintained a generally positive view of the libraries in their communities. More than half (56%) of non-users agree that closing the library would have a major impact on their communities, and about 1 in 5 (19%) think that it would have a major impact on their families. Nearly two-thirds (65%) of non-users thought that the library actually does provide them with the resources they need, so it is possible that they are still accessing library resources through friends and family.

The results of this survey revealed that the primary difference between frequent library users and non-users has to do with the information sources they trust. Respondents who had visited the library at least once in the past year were 39% more likely than non-users to agree “a lot” that libraries are a trustworthy information resource.

You can find more information about library non-visitors here, and the entire Libraries 2016 report can be found here.