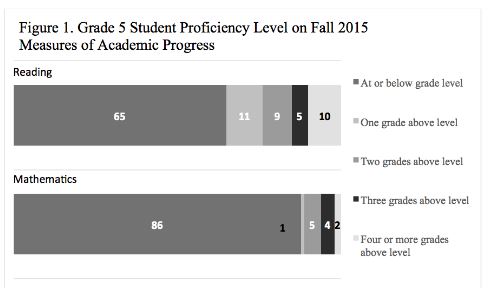 A recent study conducted by the Johns Hopkins Institute for Education Policy has shown that a much larger number of students perform above grade level than previously thought. After noticing that “getting students to grade level” was a prevalent goal throughout national education policy, the research team behind this study wanted to figure out how many students already perform one or more years above grade level on their first day of school.

After examining assessment data sets from five states, the researchers found large percentages of overachievers in every state. In Wisconsin, between a quarter (25%) and about a half (45%) of all students could have passed the next grade level in the spring of their current grade. For example, more than a third (38%) of Wisconsin’s third-graders already knew enough math to be able to pass fourth grade. Similar numbers were repeated throughout the states studied: between 11% and 37% of students in California could have passed the next grade level, and between 30% and 44% could have in Florida.

These percentages are significant, and even more so when translated to the number of students who are currently not being challenged in class. Using Wisconsin’s data, somewhere between 278,000 and 330,000 public-school students across grades K-12 are performing more than a year above where they are placed in school. In California, that number sits between 1.4 and 2 million students. Across the U.S., more than one million fourth-grade students would have outscored the same number of eighth-graders in math, which, as the researchers note, means that in a single year the number of students already performing four years above their current grade level outnumbers the entire population of Rhode Island.

As an educational resource outside the classroom, libraries can help stimulate overachieving children in a number of ways. For example, helping children seek out information about topics of interest for independent research and providing activities for children of all ability levels can help deepen their learning outside of school.

The entire report can be found here.