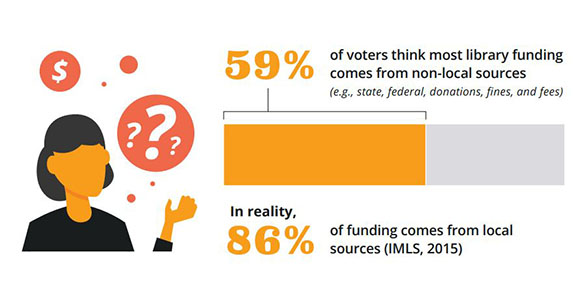 OCLC recently published From Awareness to Funding: Voter Perceptions and Support of Public Libraries in 2018, an update to a 2008 report. The report highlights key findings from their national study of U.S. voters about their perceptions of libraries. Two areas showed noteworthy change over the past ten years: the use of libraries as a community space and commitment to library funding.

Many public libraries have been working on transforming into community hubs over the past few years, and the voters surveyed by OCLC seem to have noticed. More than 2 in 5 (44%) voters said that they value the library as a gathering place, and nearly a third (30%) view the library as a community hub. A little over 2 in 5 (43%) respondents in 2018 say that the library “offers activities and entertainment you can’t find anywhere else in the community,” compared about a third (34%) who said the same in 2008. Just under half (48%) now view this as an important role for the library, while about 2 in 5 (38%) did in 2008.

Although a majority (55%) of the voters surveyed view the public library as an essential local institution, this opinion does not always translate to a willingness to vote for library funding. Only about a quarter (27%) of voters answered that they would “definitely” vote in favor of measures to support the public library, with a further third (31%) who said that they would “probably” vote in favor. While the two categories still make up a majority of voters (58%), the percentage has dropped from the three-quarters (73%) of voters in 2008 who said that they would “probably” or “definitely” vote in favor of library support measures. The gap between support for libraries and support for library funding may indicate a lack of understanding among voters about how libraries are funded in their communities.

The full report and an infographic providing a snapshot of the report’s findings can be found here. OCLC will also host a webinar discussing their findings on April 17.