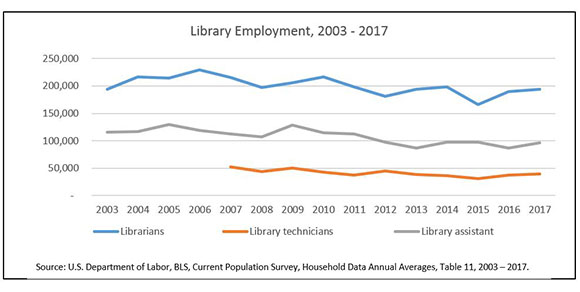 American Federation of Labor and Congress of Industrial Organizations (AFL-CIO) Department for Professional Employees recently released a fact sheet exploring, among other topics, library staff in the workforce, issues of pay and pay equity, and librarian representation in unions. This fact sheet uses data from a variety of sources, but draws primarily from the U.S. Bureau of Labor Statistics and the American Community Survey.

The report indicates that in 2017, there were approximately 194,000 degreed librarians, 40,000 library technicians, and 96,000 library assistants employed in libraries throughout the United States. The majority of librarians (3 in 5, or 60%) worked in academic or school libraries, while about a third (32%) worked in public libraries. The remaining 8% worked in special libraries.

Library workers are included in a professional occupation group that also includes education and training workers. A third (34%) of workers in this group are in a union, the highest unionization rate for any professional occupation group. In 2017, about a quarter (26%) of librarians were union members, joined by about 1 in 5 library technicians (19%) and library assistants (22%). Both librarians and library assistants who were union members reported earning about a third (31%) more than their non-union counterparts did in 2017.

For more information, the full fact sheet can be found here.