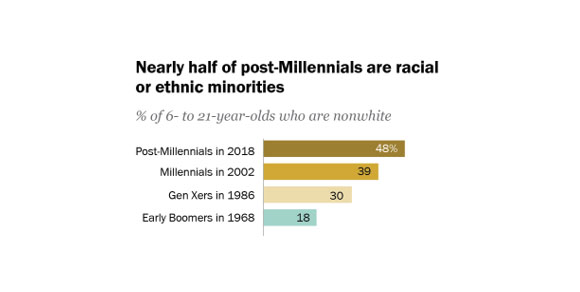 For academic, school, and public libraries, these demographic characteristics may be helpful for understanding how to best serve this generation, both now and in the future.  There are initiatives, like the Inclusive Internship Initiative, to recruit more inclusively for librarians.  In addition to increasing diversity among library staff, what services, programs, spaces, and collections will be most relevant, useful, and engaging to this generation? For the Latino community in particular, some examples of innovative outreach are the GENIAL Summit at the Exploratorium in San Francisco and the Latino Collection & Resource Center at San Antonio Public Library.  Public Libraries Online also shares ideas for strengthening community engagement with the Latino community here.

You can read the full Pew Research Center report on the post-Millennial generation here.