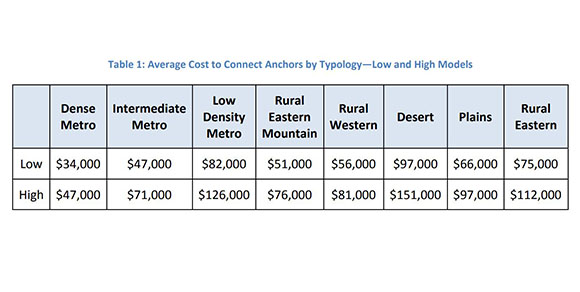 SHLB estimates that 34 million people living in the United States do not have access to broadband internet. However, nearly all (95%) Americans live in the same zip code area as a community anchor institution (Anchor). The authors argue that using Anchors as hubs to connect their surrounding communities to high-quality internet could be a cost-effective strategy to solve the digital divide, especially in rural areas.

Based on the models used by the authors, the total cost to connect all the unconnected Anchors in the continental United States and Hawaii would be between $13 billion and $19 billion over the next 5-7 years. The cost per Anchor varies based on the regional and environmental difficulty of connecting the fiber network. For example, connecting an Anchor in a dense metro area would cost about $34,000 while an Anchor in a rural desert area would cost about $151,000 because the builders would not be able to take advantage of existing infrastructure. While these costs seem steep, the price for connecting anchors could drop by as much as half if a major, national effort is undertaken in cooperation with regional authorities and broadband providers.