“Lost Einsteins” can be alleviated by childhood exposure to invention and inventors, particularly inventors of the same gender 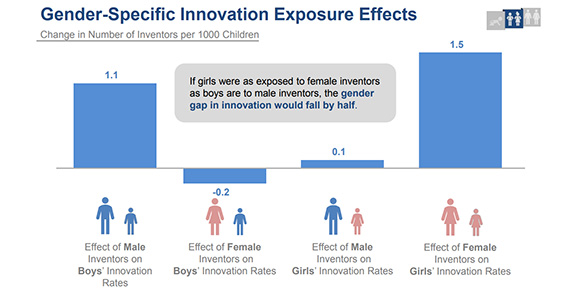 A recent paper from the Equality of Opportunity Project explores the question: “What factors induce people to become inventors?” The investigators looked into the origins of patent holders in the U.S. using tax records and school district data with test scores.

Exposure to innovation while growing up also impacted whether children grow up to be inventors.  Children from areas of the U.S. with more inventors are “much more likely to become inventors themselves.”  The gender of the adult innovators children see has an effect too.  According to the study, “our estimates imply that if girls were as exposed to female inventors as much as boys are to male inventors, the gender gap in innovation would fall by half.” The report concluded that “if women, minorities, and children from low-income families invent at the same rate as high-income white men, the innovation rate in America would quadruple.”

Libraries, as places that encourage exploration and curiosity, have an interest in supporting innovators and entrepreneurs. And, libraries can play a role in exposing children to innovation and inventors. Many libraries have makerspaces or areas for creation, which can expose children to creative problem solving and applications of math.  For example, the 2017 Library Journal best small library, Boundary County Library District, emphasizes invention.  Libraries also host speakers and programs, and they could bring in local inventors and innovators, or discuss famous inventors, who reflect the identities of children in their community.  Libraries can also strive to have collections that showcase inventors of many backgrounds and periodically highlight these titles. The Library of Congress has many suggested titles in their online guide to women inventors.