Common Sense Media study finds that high percentages of teens have smartphones, use them a lot, and have trouble disconnecting – even to sleep 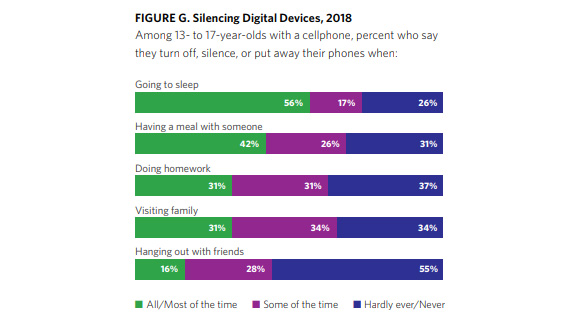 Common Sense Media, a nonprofit organization that studies youth and media, recently released the 2018 “Social Media, Social Life” report on teens and social media. The report summarizes the results of “a nationally representative survey of 1,141 13 to 17 year olds in the United States.”

Teens report that disconnecting from their devices is challenging. They were the least likely to turn off or put away their phone most or all of the time when with friends (16%), and most likely to disconnect when going to sleep (56%). Interestingly, a third of teens (33%) also report that they “wish their parents would spend less time on their devices.” This statistic is also on the rise from 21% in 2012.