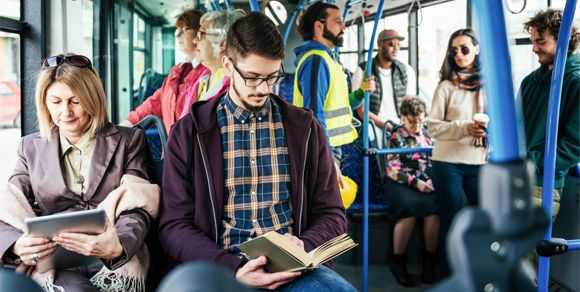 About seven out of ten adults (72%) in the U.S. report that they read a book in the last 12 months. This percentage has stayed about the same since the Pew Research Center started conducting studies of adult reading habits in 2011, but it does vary depending on income and education.

In the most recent survey in 2019, nine out of ten college graduates (90%) said they read a book in the past year while only about three out of ten (32%) adults without a high school degree did. Higher percentages of women, Whites, those earning more than $75,000, and people living in urban areas reported reading a book in the past year. Males, Hispanics, those earning less than $30,000, and people living in rural areas reported lower rates of reading. The overall percentage of men who read a book decreased from 73% in 2018 to 67% in 2019.

The portion of people reading audio books is on the rise, and increased from 14% in 2016 to 20% in 2019. This increase is particularly strong for college graduates and those who earn more than $75,000. Print books, however, are still the most popular way for people to read: 65% of the people who read a book in the last year read a print book. Another 25% of people reported reading an e-book in the past year. About 37% of adults read only print books.