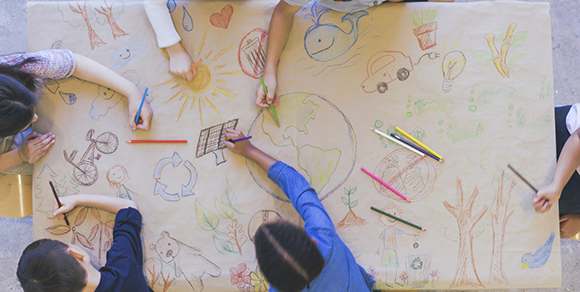 Half a century ago, Earth Day began as a grassroots effort to bring attention to environmental issues. Now fifty years later, organizers are bringing the focus back to climate change, an admittedly enormous challenge, and urging everyone to take part in protecting and restoring our planet. As lending institutions, libraries have long understood their role as stewards of environmental responsibility. The Green Library Movement began in the early 1990s as a commitment to greening libraries by reducing their environmental impact on the planet. The movement gained popularity around 2003 and then in 2019, the American Library Association (ALA) Council adopted sustainability as a professional core value.

Is the Green Library Movement Growing?

In the years since the movement took off, libraries around the world have reviewed their operations and programming to identify ‘greener’ methods. Buildings have been rebuilt or remodeled to include energy efficient design and physical materials have been replaced with digital mediums. However, much debate still remains over whether libraries are fully embracing the challenge. A 2012 study conducted in Finland discovered that up to 60 percent of respondents believed the components of environmental management had not been taken into account enough in their own libraries. When asked about everyday routines, more than half of libraries were turning off lights after 10 minutes, switching computers off at the end of the working day, and sorting waste products. However, only about 10 percent of respondents said their library’s printers print on both sides of the paper by default. Less than five percent said laptops were preferred in computer acquisitions.

Given limited resources, it can be difficult for a library to prioritize green initiatives, especially if they can’t pinpoint where they are expending the most energy consumption. To provide a better understanding of an institution’s Global Warming Potential (GWP), students at University of California Berkeley developed a carbon emissions calculator specifically for academic libraries. While it can be adapted to public and school libraries, the tool fails to take into account newer technologies (e-books, 3D printers, sewing machines, etc.), as well as waste produced from programming and outreach. Using the engineering library at UC Berkeley as a case study, researchers found that the HVAC was the largest abuser of annual power consumption (~145,000 kWh). Of materials, volumes had the greatest GWP at 5,394 metric tons of CO2 equivalent per year.

Greening a Community, Not Just the Library

Even if libraries are not huge carbon emission offenders, they still play a pivotal role in introducing sustainability initiatives to their communities. As green buildings, they can demonstrate the use of solar panels or reflective roofing, educate the community about residential use of rain barrels using their own rainwater collection systems, and incorporate native plants into landscaping to reduce reliance on irrigation.

E-books are another popular way of reducing the carbon footprint. A study at Boston College found that the majority of environmental waste for both e-books and paper books originates before reaching the hands of the intended audience. However, paper books contribute significantly more waste during distribution, making them less environmentally friendly. According to the study, a user would have to access 33 e-books on a device before offsetting the carbon footprint of one printed counterpart.

Libraries can also publicize green initiatives through creative programming. For adults, one librarian suggests screening a documentary related to sustainability. For children’s programming, another librarian tries to find materials that can be reused or repurposed. She also refuses programs that produce single-use waste. Being conscious of a program’s environmental impact—and highlighting that success—can be key takeaways for patrons.

Every Day is Earth Day in Libraries

Climate change may be the theme of this year’s Earth Day celebration, but more and more, it is serving as a foundation for libraries. Whether through building constructing, material use, or programming, multiple opportunities exist for libraries to become agents of change within their communities. Earth Day can be every day in a library.